In 1999 I took up the position of professor in Scientific Visualization at Linköping University. The professorship was located at the newly launched campus in Norrköping. The first students in the Media Technology (MT) program was then in their second year. I was asked as one of my first duties to design a 4th year profile in visualization for the students.  The profile contained the following courses at advanced level:

My own course was the Scientific Visualization course which I was lecturer and examiner for. But I was also giving guest lectures in the other courses.  The Visualization profile was a great success and attracted a large number of students. I was nominated by the MT students to the LinTek teaching award "the golden carrot" in 2002 and 2006,  for the course on scientific visualization and my role and engagement in the build-up of the Media Technology program.

Based on the success of the 4th year profile  I also coordinated the setup of the masters program on Advanced Computer Graphics and Visualization at Campus Norrköping.

The courses that I defined back in 1999 are still given, in modified versions, as part of the MT program. I taught the Scientific Visualization TNM067 course until 2015. After that I am primarily giving guest lecturers in several courses.

Over the years I have supervised a multitude of master's thesis projects. Through my contacts in the US students have been able to do their thesis projects in the VFX industry in Hollywood. In the area of astrovisualization students have done projects at the American Museum of Natural History in New York and at NASA Goddard Space Flight Center in Washington.

List of some of the thesis work I have supervised 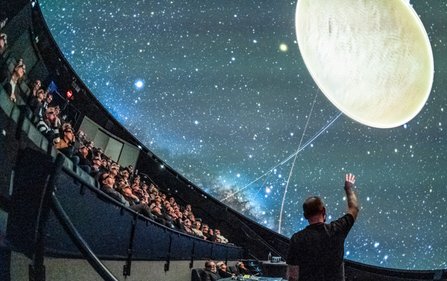 Teaching in the dome theatre at the Norrköping Visualization Center C

The Visualization Center C provides a context for research projects on learning and communication. I have published several papers based on our experiences and introduced the concept of Exploranation to denote to convergence of exploration and explanation in science communication and teaching.

A recent book chapter in Foundations of Data Visualization summarizes the research results.

Department of Science and Technology